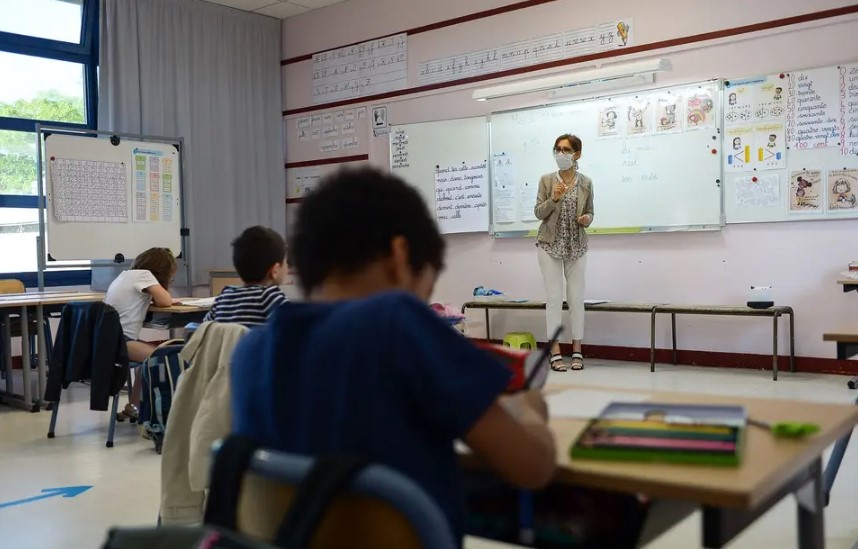 The big comeback in class is Monday! All kindergarten, elementary and middle school students must return to class on June 22, and this is mandatory. But even if the epidemic weakens, they will not take up the torch as before confinement.

The Ministry of National Education unveiled this Wednesday evening the new health protocol which will have to be respected in the establishments. From rules dormant compared to the previous protocol published in early May. 20 Minutes tells you what the everyday life of the students who will return to school on Monday will look like.

What will be the distances between the two students?

Due to the absence of a rebound in the epidemic since deconfinement and several studies which have shown that children are not very carriers of the virus, the rules of physical distancing in schools and colleges are relaxed. The 4 m2 per-pupil rule no longer holds. In kindergarten, no distance rule is necessary, either inside or outside, announced Wednesday afternoon Jean-Michel Blanquer on Public Senate. “It is the same rule as for the cribs for realism because we know that it is not easy to enforce this physical distance,” he said. On the other hand, the physical distance must be maintained “between the pupils of different groups”, which means to avoid the mixing of several classes in particular in the courtyard,

In elementary school, the instruction is different: a meter of distance between the students is recommended. However, the Minister suggested that accommodation would be possible in classrooms. Because some are too small: “We will have to have a little less than a meter,” he added.

In college, it will be necessary to respect a distance of one lateral meter between each pupil in class, when they are side by side or face to face. If the distance of one meter is not possible, then wearing a mask will be “compulsory for middle school students,” conceded the minister. But in the yard or during outdoor sports sessions, no need to respect this meter. The ministry explains that “the organization of the classroom in the open air is therefore encouraged”. In addition, “all areas of the establishment can be mobilized (CDI, computer rooms …), including to offer other activities (studies, 2S2C)”, says the document. School principals and principals will, therefore, have to tailor-make. And here again, the physical distance must be maintained between students from different groups.

In high schools, a minimum distance of one meter is respected between each person in confined spaces and in outdoor spaces. Note for boarding students, they can stay there but “the distance between the beds must be at least one meter”.

Who will wear a mask?

New: it will not be compulsory for teachers when they are teaching and are at least one meter away from the pupils, according to the protocol. Two masks will be provided to educational staff for each day of presence in the establishments.

Regarding the students, nothing changes for those in kindergarten, for whom “wearing a mask is to be avoided”. Wearing a mask is also not recommended for those in elementary schools, “but masks are available to equip children with symptoms while waiting for their departure from school”. And for students with pathologies, it will be up to the referring doctor to give his opinion. Concerning middle school students, the instruction is more flexible, because the wearing of a mask is now compulsory only if the distance of 1 m cannot be respected and when they are travelling. Masks will be made available to them if their family has not provided them.

What will be the hygiene rules to be observed by the students?

Will parents be able to return to schools?

Theoretically, yes, because the text specifies that “carers, as well as outside contributors, can now enter school buildings after cleaning or disinfecting their hands. They must wear a protective mask ”. A plus for kindergarten students, who are made safe by the presence of their parents in the morning when they arrive at school.

How will they circulate in establishments?

In order to avoid that the pupils do not cross too often, the school heads are invited to spread out the arrival and the departure of the students in time “according to the number of pupils received by room, the staff present and the possibilities for adapting school transport ”, specify the protocol. In college, the classes will stay in the same room if possible and it will be up to the teachers to move around. To avoid having too many people in the courtyard, the recreations “are organized by classes”.

What about the canteen?

Students’ arrivals will be staggered and students of the same class must have lunch together. “The flows and the density of the pupils are organized by respecting the distance of at least one meter between the groups”, specifies the text. In middle and primary school, pupils should ideally have lunch within a meter of each other and if this is not possible “it is advisable to have pupils of the same class eat together and to respect a distance of at least one meter with the other groups “. In high school, the rules are stricter, because of older teenagers potentially more vectors of the virus. So students must respect “the distance of a minimum of one meter in catering areas”.

Will more games be allowed at recess?

No more static recreations. “Access to outdoor games, benches, collective spaces is now authorized if daily cleaning is provided (or after a period of no use of approximately 12 hours). “” The provision of shared objects (balloons, toys, books, games, pencils …) is allowed when disinfection at least daily is ensured (or objects are isolated 24 hours before reuse) “, also specifies the document.